A Concise (Progressive) History of US Racism

This cartoon is a deceptive (and dangerous) way that liberals call out reverse racism. This is not really an accurate depiction of how racism operates in the United States.  I propose a progressive critique. 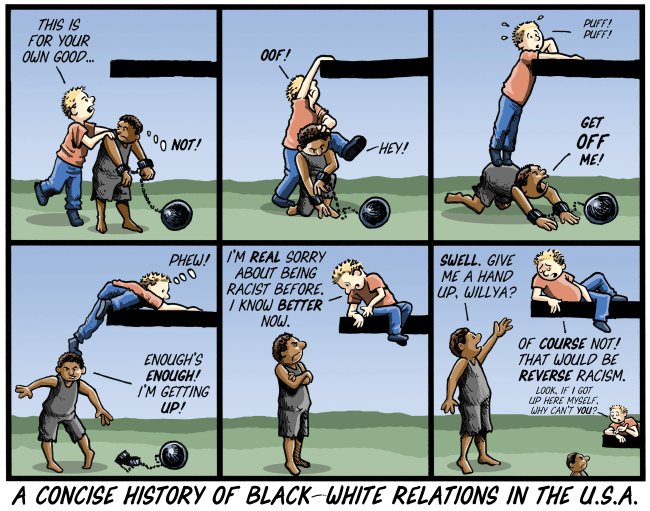 This cartoon (while it has good intentions) rests on dangerous assumptions. First, that minorities are unshackled and no longer have a ball and chain. Second, that black and brown oppression is largely linked to past discrimination, and that the egregious form of present discrimination takes place when whites refuse to give a boost to minorities.

These things are true, to an extent...but they are overstated, and they grossly ignore and understate what I believe is the hidden form of discrimination---that the way in which we measure minorities so that they can reach the next level is severely unfair.

This comic strip would be much more accurate if there were two ladders from the ground to the next level. One ladder for whites that is large and sturdy, and another for minorities that is small and rickety.

This is only a preview. Your comment has not yet been posted.

The letters and numbers you entered did not match the image. Please try again.

As a final step before posting your comment, enter the letters and numbers you see in the image below. This prevents automated programs from posting comments.

Having trouble reading this image? View an alternate.

(Name and email address are required. Email address will not be displayed with the comment.)